Taking place for 3 days from the First Friday of February

This festival is held to promote the growing of flowers and decorative plants in Chiang Mai, featuring a parade of colourful petalled floats and beauty contests

Most colourful lion and dragon dances are staged by the Chinese community in Nakhon Sawan City and in Chinatown, Bangkok.

(on the full-moon day of the 3rd Thai lunar month, February-March) One of the holiest Buddhist holy days, Magha Puja Day marks the occasion when 1,250 saint-disciples of the Buddha spontaneously gathered to hear his preaching. This day is now considered Day of Love in Buddhism.

(6 Apr) The day to commemorate the founding of the present Chakri Dynasty in 1782.

(13 - 15 Apr) The traditional Thai New Year, joyfully celebrated throughout the country with rituals of merit making, honouring elders, and parades of dancers and music troupes. Water splashing, an amusing way to make you cool in the hot season makes the festival most interesting. It is celebrated in a grand way in Chiang Mai, Khaosan Road and Silom Road in Bangkok, Pattaya and at Phra Pradaeng near Bangkok.

(1 May) To celebrate the Labour Day, a great number of Thai labourers gather at Sanam Luang to join the festivities held by the government which include pop concerts, cultural shows, dances and a variety of fun activities and entertainment.

The day when the reigning King Bhumibol was crowned as the 9th king of the Chakri Dynasty in 1950.

(May) Presided over by the King, this ancient Brahmanic ceremony is held at Sanam Luang in Bangkok to mark the beginning of the planting season and to bless the farmers with bumper harvests in the year.

(May) Called "ngan bun bang fai" in Thai, it is a unique festival of the Northeast, most elaborately celebrated in Yasothon province. Bamboo rockets are launched as an annual plea to gods for plenty of rainfall in the rainy season.

(on the full-moon day of the 6th Thai lunar month, June) It is one of the most important Buddhist holy days. On this day in different years, the Buddha was born, attained Enlightenment and entered Nirvana.

(on the full-moon day of the 8th Thai lunar month, July) On this day the Buddha gave his first sermon to his first five disciples after his Enlightenment.

(1st day of the 8th waning moon, July) The first day of the three-month period of Rain Retreat when monks meditate and study the Buddha's doctrine and laymen renew their commitment to follow the precepts of Buddhism. Monks are required to stay at their resident temples throughout the Rain Retreat period.

(July) People in many provinces in the Northeast celebrate Khao Phansa Day by arranging processions of folk dances and floats to the monasteries, carrying huge, intricately carved candles to be lit continuously throughout the Rain Retreat period. Grand celebrations take place in Ubon Ratchathani province.

(12 August) To celebrate the Queen's birthday and the Mother's Day, a grand celebration is held at Sanam Luang in front of the Grand Palace. There are free concerts and performances given by many popular Thai artists and a variety of entertainment. Buildings along Ratchadamnoen Road and other main roads are decorated with thousands of colourful lights, flags and portraits of the Queen.

(October) During this period, people of Chinese origin all over the country make merit by abstaining from food and oil from animals. The large-scale festival is held in Phuket and Trang. Sacred rituals are performed at various Chinese shrines and temples. People carry the god statues in a great procession and observe traditional magical performances as a sacrifice to their gods.

(September - October) In September and October, when the rivers and waterways are in full spate, boat-racing festivals are held in several provinces that the rivers flow through. The best known are held in Nan, Phichit, Phitsanulok and Chumphon.

(23 October) Held to commemorate the death of King Chulalongkorn the Great (Rama V) who passed away in 1910.

Loi Krathong or Festival of Light

(on the full-moon day of the 12th Thai lunar month, November) Loi Krathong is the most romantic festival of this country. In the evening, people gather at the waterside to float Krathongs, lotus-shaped vessels lovely decorated with flowers and lit candles, as thanksgiving and worship to the Goddess of Water. Magnificent celebrations are held in Sukhothai and Chiang Mai.

(The 3rd weekend of November)

A northeastern province, Surin is famous for its world-famous elephant round-up. The show features elephant football, elephant race and hunt and elephants in ancient battle. 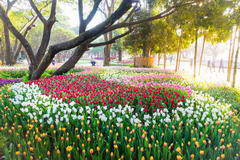 (28 Nov 2018 - 31 Jan 2019) The annual Poinsettia Festival is held in the northeastern province of Loei, about
520 km. from Bangkok. Held at the entrance to Phu Rua National Park on the border with Laos, the festival celebrates the poinsettia plant which, with its red flower bracts, is also called a Christmas tree. Phu Rua district is one of the best places in Thailand to see cold climate plants and one of the most famous is the poinsettia plant. The best time of year to see Christmas plants is from late November to late January when they are in full bloom,
creating a glorious scarlet carpet that attracts sightseers and photographers. Phu Rua National Park offers nature-based sightseeing and activities such as walking trails, waterfalls, a pine forest, and vantage points. During the cool season, the temperature here can drop to as low as 0 degrees Celsius, leading to fog and mist formation around the mountain ranges. Therefore, visitors can enjoy the beautiful sea of mist here too.
For more information, please contact TAT Loei Office, Tel. +66 (0) 4281 2812,
4281 1405, E-mail: This email address is being protected from spambots. You need JavaScript enabled to view it.

(around the end of November or the beginning of December) It is held in Kanchanaburi province to commemorate the horrible ordeal suffered in the construction of the Death Railway to be used by the Japanese army as a route of supply from Thailand to Burma in World War II. The festival features a historical exhibition, fun fair, bazaar and

We are a small private hotel close to Grand Palace. You'll discover peacefulness beyond expectation of any 3-star hotel in Bangkok, as one of our guests complimented us as "a hidden oasis". more details